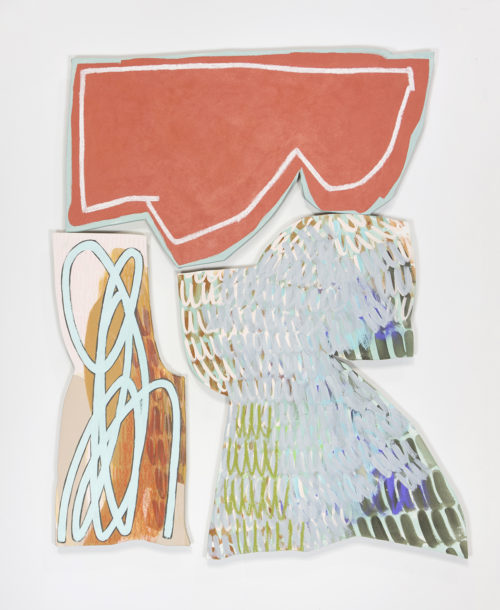 Freestanding shows Hill’s development of the “Cutouts,” a body of work she began in 2015. The Cutouts are paintings on hand-cut wood panels covered with canvas, which hang a few inches off the wall. They often consist of multiple panels, which configured together, make up a singular work. Hill begins her process by designing her shapes. In this phase, she determines how the separate panels will interact with one another and what role they will have within the composition, as some panels now take on the role of an object within the composition, or a ground or background component. She also chooses the scale of the pieces, considering material issues of strength and weight of the panels. She then cuts the panels in her studio and wraps them with canvas. Painting is the second stage, and while reacting to the constraints of the shapes she has created, she has also greatly developed the complexity of mark-making in her paintings and how the composition works across the panels.

Since her first exhibition, Hill has been investigating deeply the formal constraints of her Cutout format. When the painting declared its own object-hood by coming off the wall and acquiring organic shape, the artist felt that it relegated the space around it to a background environment, and that she ceded control of that space and the relationship between her works within it. Hill has since been exploring how the painting could reassert itself in space, reacquire its background, and become “freestanding”. This conceptual progression can be found in works such as the Bookends series and her larger landscape works, which incorporate elements of figure and ground within them.

Hill’s multi-panel compositions no longer function as puzzle pieces, but instead as dazzling exercises in positive and negative space. The painting phase has allowed additional exploration as compositions spread across panels or stop firmly at the borders. Each painting seems bound by an increasingly demanding set of rules from the one prior, as Hill continues to challenge the paintings to live up to the shapes she has created for them.

Justine Hill was born in 1985 in Tarrytown, New York. She received her MFA from the University of Pennsylvania and her BA from the College of the Holy Cross. Hill’s most recent exhibitions include Movers and Shapers with Ali Silverstein at Victori + Mo in Brooklyn (2018) and a two-person show with Robert Burnier at David B. Smith Gallery in Denver (2018). She has been in critically reviewed group shows such as Metamodern at Denny Gallery (New York) and Immediate Female at Judith Charles Gallery (New York). Her work has been reviewed or featured in Hyperallergic, New York Magazine, The Observer, The Huffington Post, The Art Newspaper, Artnet, Artsy, Artspace, Arte Fuse, and Two Coats of Paint.

Please join us for an opening reception for the artist, Justine Hill, on Thursday, March 29th, from 6 to 8 p.m. Join the event on Facebook.

Catalog essay by Jason Andrew, an independent curator and the Founding Partner of Artist Estate Studio, LLC, the entity that manages the estates of Elizabeth Murray, Jack Tworkov and Edith Schloss among others. He is also the Co-Founder of Norte Maar, a non-profit arts organization based in Cypress Hills, Brooklyn that promotes collaborations among the visual, literary, and performing arts.