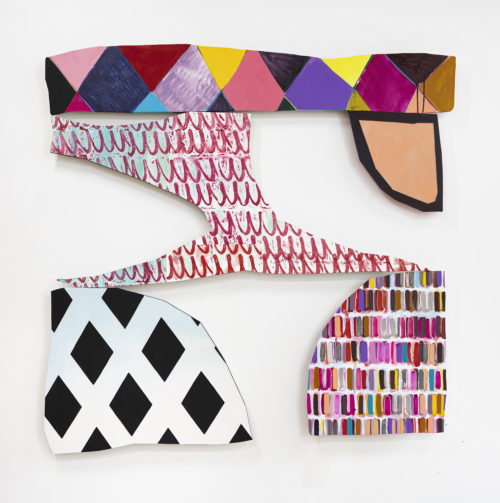 “The first requirement in any unfocused situation is to locate the boundaries of the field, since the boundaries alone can provide orientation. Thus any pattern or grid is initially scanned in order to establish its relationship to the physical world. It demands location as a physical unit.”

Denny Dimin Gallery is pleased to announce Touch, a solo exhibition by Justine Hill on view from September 10th to October 31st, 2020, in the New York location. This is Hill’s third solo exhibition with the gallery. A catalog will accompany the exhibition with an essay by art historian Dana Rodriguez.

Justine Hill’s work explores the boundaries of abstract painting with her unique approach to form and mark making. The works in the exhibition are a continuation of what she has styled the “Cutouts” – paintings on shaped wood panels wrapped in canvas. Hill began to work with this process five years ago when she was questioning the circumscribed boundary of the single rectangle for a painting. The way Hill chooses to arrange the pieces, how the shapes relate to one another, and the negative spaces within and around them, are all essential to the work.

The title of the exhibition, Touch, refers to the unquantifiable loss we have experienced in our socially distanced, remote lives over the past few months. It is an expression of desire to return to viewing art in person, because without the idea of touch, components such as texture, scale, volume and color are impossible to understand with accuracy. Hill writes, “Touch is about standing in front of something or someone. It is about all that we learn by being in the same place, even when no one is speaking. It is about feeling the touch of the handmade. It is about everything that is lost in translation on a screen.”

The shift to life spent indoors, at home, has also had an impact on the imagery of the show. The smaller scale works, aptly titled Still Life, evoke forms such as sconces, vases, pillars, shelves, and niches. The largest works in the show, Kilter and Handwork, are larger explorations of interior spaces and the unique spatial relationships of the objects that occupy them. Some of Hill’s most relevant influences include the Pattern & Decoration movement’s central figures and disciples, such as Cynthia Carlson, Robert Kushner, and Judy Ledgerwood, who were also strongly influenced by decorative elements in daily life.

The newest works in the exhibition, titled Replica, are on the one hand her most abstract, least referential works of the past few years. On the other hand, they directly explore the limitations of replicating imagery found online, as their shapes are deliberately drawn from the work of another artist, Marina Adams. These works also deploy printing, or stamping, onto paper, which Hill mounts to the canvas. The artist explores shifting senses of scale, evocations of our living spaces, and reproduction of imagery in order to challenge viewers to be thoughtful about how they receive sensory information about art, and the nuances of how it can differ between real and online experience.

Justine Hill was born in 1985 in Tarrytown, New York. She is based in Brooklyn, New York. Hill received her MFA from the University of Pennsylvania and her BA from the College of the Holy Cross. Hill’s most recent exhibition was Pull at MAKI Gallery in Tokyo (2020). Hill’s most recent solo exhibition was Pull at MAKI Gallery in Tokyo (2020). Hill’s other recent exhibitions include Fanfare at Fordham University’s Ildiko Butler Gallery (2020), Bookends at David B. Smith Gallery in Denver (2019), Backdrops at Art-in-Buildings in New York (2019), Freestanding at Denny Dimin Gallery (2018), and Movers and Shapers with Ali Silverstein at Victori + Mo in Brooklyn (2018).  Her work is in significant collections including The Davis Museum (Wellesley, MA) and The Columbus Metropolitan Library (Columbus, OH), among others. Her work has been reviewed or featured in Art in America, Hyperallergic, New York Magazine, The Observer, The Huffington Post, and The Art Newspaper.

The catalog includes an essay by Dana Rodriguez.

Dana Rodriguez is a recent graduate from the Modern and Contemporary Art: Critical and Curatorial Studies program at Columbia University. Previously, she received a BA in Art History and a BS in Psychology from the University of North Carolina at Chapel Hill. As an emerging curator and writer, she has worked at the Whitney Museum of American Art, Robert Rauschenberg Foundation, North Carolina Museum of Art, Ackland Art Museum, and with various art advisory firms.

Justine Hill in Conversation with Dana Rodriguez
Zoom Talk about "Touch"
October 14, 2020
This site uses analytics, cookies and/or other 3rd party technologies that may have access to your data, which are used to provide a quality experience. If you do not agree, opt out and we will not load these items, however, necessary cookies to enable basic functions will still load. Visit our Privacy Policy to learn more.
I Agree I Disagree
Contact Us:
Email us at [email protected] for requests involving data we collect. View our Privacy Policy for more info.
Opt In / Out:
To change your opt in settings, please click here to opt out or in. Or, close this popup.