The Armory Show: Playing It Safe During an Unsettled Time

Another year, another crisis: The Armory Show proves resilient again as it opens amid the coronavirus outbreak. Our critic surveys the fair’s many welcoming entry points. 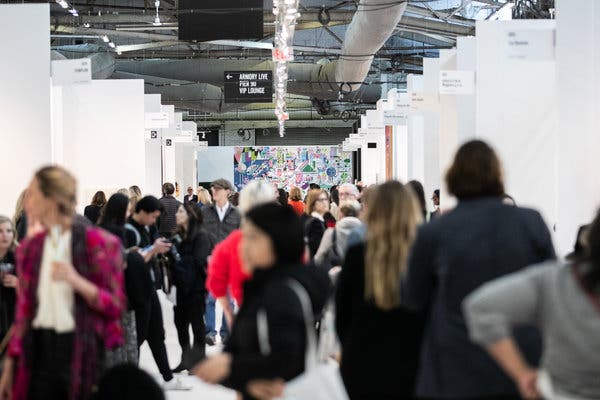 Last year the Armory Show weathered a crisis when Pier 92 over the Hudson River was condemned shortly before the art fair opened, precipitating a last-minute reshuffling of booths and the shutting down of a satellite display. This year, the fair has settled on Pier 90 and Pier 94 (dress for the outdoor walk between them) and the catastrophe is the coronavirus, which had already forced the cancellation of Art Basel Hong Kong last month. Though the Armory Show has opened smoothly, hand sanitizer stations are everywhere and elbow-bumping has replaced handshaking and air-kissing as the greeting du jour.

But what about the fair itself?

It’s a solid one — if on the safe side — with lots of painting rather than complicated installations or technology. Fairs are not merely commercial ventures. Sections here that have been organized by curators affiliated with prestigious museums (like Anne Ellegood and Jamillah James, both of the Institute of Contemporary Art, Los Angeles) demonstrate the increasingly porous divide between profit and nonprofit.

Given the election season and the state of the world, the Armory Show has a sizable amount of activist art. Will these artistic gestures have an effect on policy? Who knows. Like many counterintuitive aspects of our moment, maybe the next revolution will kick off inside an art fair. Here are some themes and strains (pun cautiously intended) that caught my attention. 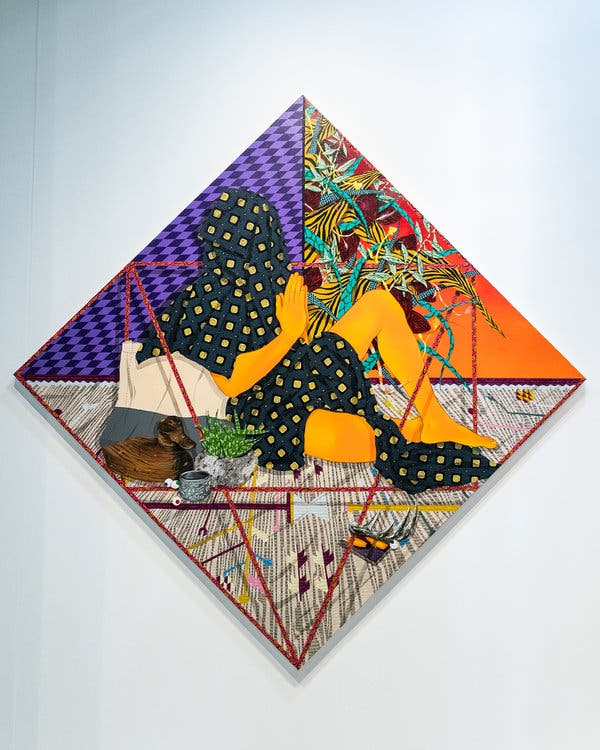 The Armory Show is long in painting, with a range of approaches. The wickedly acerbic canvases of Christine Wang (Platform 6,presented by Night Gallery, Pier 90) originated in internet memes. Robert Nava’s monster paintings at Sorry We’re Closed (Booth F13, Pier 90) have a studied, primal energy, drawn from graffiti but completed with both aerosol and oil paint. Austin Lee’s paintings at Jeffrey Deitch (Booth 819, Pier 94) fuse graffiti with digital ideas and an electric candy-colored palette to create a sense of energy and psychic unrest.

Amir H. Fallah at Denny Dimin (Booth F1, Pier 90) presents dense, richly-hued paintings that refer to personal and racial histories. Georgina Gratrix at the South African gallery SMAC (Booth F32, Pier 90) works in a grotesque-expressionist vein reminiscent of Dana Schutz, while Eric Firestone (Booth 909, Pier 94) has a wonderful roundup of older contemporary paintings like Joe Overstreet’s “HooDoo Mandala” (1970), a canvas stretched like a tarp on the wall. Finally, the Viennese artist Philip Mueller at Carbon 12 (Booth P24, Pier 94) is showing 60 paintings of characters at a fictional Mediterranean island resort — wildly tattooed and occasionally defaced. A perfectly off-kilter and dystopian roundup of beautiful rogues and misfortunates, it successfully characterizes our own unsettled time, inside the bubble of an art fair.

A version of this article appears in print on March 6, 2020, Section C, Page 15 of the New York edition with the headline: Playing It Safe During an Unsettled Time.