As David Little sees it, there’s a fair amount of gray in that definition, since there’s debate about when modern art, the dominant theme of the 20th century, segued into contemporary art — sometimes broadly defined as “the art of today.”But the director and chief curator of Amherst College’s Mead Art Museum also notes that many contemporary artists are willing to work in multiple mediums — painting, printmaking, photography, video — and can comfortably integrate those fields, while also finding inspiration from multiple sources, from the media to found objects to plastic and plexiglass.

On a recent tour of the Mead, Little was able to point to a good number of those examples. The museum received a gift this summer of over 170 contemporary artworks from an anonymous donor, and this fall it has opened a new exhibit, “Starting Something New: Recent Contemporary Art Acquisitions and Gifts,” that pulls together over 60 artworks from the donation as well as other recent acquisitions of contemporary art.

Little said some art historians point to the mid 1950s as a dividing line between modern and contemporary art, but that the work in the Mead exhibit is all much more recent that, with the oldest piece dating from 1987.

He led about 20 people on a tour of the new works, which included sculpture, paintings, photographs, prints and mixed media pieces. What distinguishes many of these new items, and that of contemporary art in general, he said, was that contemporary artists often “don’t necessarily think that art must be sacred … There’s the idea of the artist being a scavenger [for materials] and testing and blurring boundaries between mediums.” 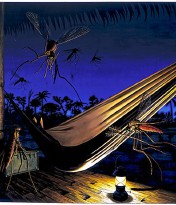 One good example: a photograph by Erin O’Keefe, an artist based in New York City and New Brunswick, Canada with a background in architecture and who creates what appear at first glance to be paintings of basic geometric shapes. But these are in fact photographs, produced in such a way that they appear like optical illusions, confusing the senses with images that appear to be altered but are actually shot straight on, without any retouching.

“It looks like a painting, doesn’t it?” said Little as he gestured to “Built Work #38,” a image of what seemed to be a wooden triangle, a half-circle and a couple other shapes, arranged in a tableau that made it unclear which shape was supporting the others. “But it’s a photograph, and yet there’s no Photoshop, no manipulation. [O’Keefe] says ‘I take photos to see what the camera sees.’ She basically employs the camera to create an illusion.”

Just down a little further along the gallery wall, Little asked the visitors to give their impressions of “Please,” a large painting, spelling out that word (with the letters all bisected by horizontal lines), by New York City/New Mexico artist Sarah Bush. “What kind of paint does she seem to use?” asked Little.

One woman suggested it looked like the kind of semi-gloss paint used in painting houses. “That’s right,” said Little, who added that Bush painted this particular work after living near New York’s Times Square, where she was likely influenced by the district’s neon lights.

The painting, with its graffiti-like look and feel, he noted, “has that kind of pop-art sensibility as well.”

“Starting Something New: Recent Contemporary Art Acquisitions and Gifts” will be on exhibit at the Mead Art Museum through July 26, 2020. Different artworks will be added to the show during that time. Additional information, such as visiting hours at the museum, is available at amherst.edu/museums/mead.