Cheeseburgers, Oil and Minimum Wage: Building a Museum of Capitalism

A roving exhibition, now on view in Manhattan, looks back on capitalism and its “artifacts” from an imaginary future after the system has disappeared. 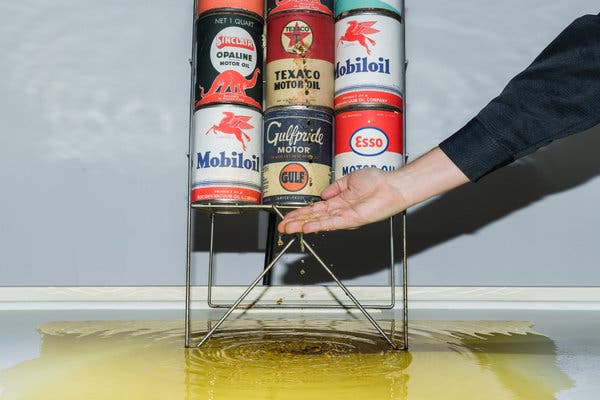 [Matt Kenyon’s “Supermajor,” a fountain of motor oil (actually, dyed water), is a “memorial to the era of petro-capitalism and its mistaken beliefs” of endless supply, according to a wall label at the Museum of Capitalism. George Etheredge for The New York Times]

Thirty years ago last week, the Berlin Wall came down, a surprise event that soon brought the rest of Soviet-style communism down with it.

But a few days before the anniversary of that epochal moment, a crowd gathered in a Greenwich Village gallery to celebrate the opening of the latest iteration of the Museum of Capitalism, a roving exhibition dedicated to looking back on the system that triumphed in 1989 from some imagined future when it, too, has disappeared.

There were “edible artifacts” of capitalism like cheeseburgers and energy bars, passed on trays bearing museum-like labels. Lines formed around the more interactive pieces, including a hand-cranked “minimum-wage machine” and a disassembly line where visitors, armed with hammers and pliers, were subjecting discarded shoes and cellphone chargers to enthusiastic creative destruction.

“We want to encourage people to talk about it, to figure out what this thing is that is too close for us to see,” Timothy Furstnau, who, with Andrea Steves, works as the curatorial collective Fictilis, said, elaborating on the project’s goal of “making capitalism strange.”

The museum began life in 2017 in Oakland, Calif., where it filled a nearly 13,000-square-foot space in a stalled retail development in a gentrifying warehouse district. (Yes, there was a gift shop, with tote bags and other hip branded merchandise, as well as an exact replica, with empty shelves, created by the artist Evan Desmond Yee.)

[The exhibition, on view at Parsons School of Design until Dec. 10, looks back on capitalism from an imagined point in the future after it has disappeared. George Etheredge for The New York Times]

The museum’s latest incarnation, on view through Dec. 10 at the Anna-Maria and Stephen Kellen Gallery, at Parsons School of Design, is in a more conventional white-cube setting. Still, passers-by might find themselves puzzling over the barbed wire strung across the gallery’s plate-glass windows.

Barbed wire may be visual shorthand for a totalitarian gulag. It’s also, a wall label inside notes, a capitalist product par excellence: It played a pivotal role in the westward expansion of the United States, as well as in an 1892 Supreme Court patent case that helped create ideas about intellectual property that still undergird capitalism today.

The mock-fencing across the windows also sharply underlines a question raised by the exhibit: Is the real museum of capitalism inside the gallery, or outside on the streets of New York?

“If people are walking by right now, do they see us as held inside looking out?,” Julia Ott, an associate professor of history at the New School and a founder of its Robert L. Heilbroner Center for Capitalism Studies, said at the opening. “Or do they feel like they are looking in at partying and affluence?”

The 29 pieces in the exhibition touch on big-picture topics like labor, gentrification, immigration and fossil fuels, which are elaborated in deadpan, retrofuturist labels. “The F.D.I.C. was a corporation of the United States government whose role was to provide deposit insurance,” reads one accompanying the artist Michael Mandiberg’s “FDIC Insured,” an array of remaindered business books stamped with the logos of some of the hundreds of banks that failed after the 2008 financial crisis.

Don’t come here expecting any tributes to the exuberant billboards of Times Square, or even ironic images of shelves overflowing with 1,001 kinds of toothpaste. The museum’s palette runs to muted, even depressive tones, with the few deceptively cheery bursts of color coming from works like Sharon Daniel’s “Undoing Time,” which features American flags made by prison labor, or a selection drawn from what a label calls the world’s largest collection of pharmaceutical marketing pens.

[A selection from what may be the world’s largest collection of pharmaceutical marketing pens. George Etheredge for The New York Times]

Today, a growing number of Americans say they support some form of socialism. But that hardly means the project’s critical view of capitalism has always enjoyed a friendly reception.

“Sometimes, people would leave in a huff, asking, ‘Where’s the Museum of Communism?’” Mr. Furstnau said of reactions to the exhibition, which was also installed at Tufts University, outside Boston. “One answer is, there are several. That story is being told.”

For something so omnipresent, capitalism is hard to define exactly. The project’s companion book opens with a playful riff on a dictionary definition that basically omits all the nouns.

Professor Ott, who last spring taught a “history lab” at the New School with Mr. Furstnau and Ms. Steves, took a firmer swing, differentiating capitalism from mere buying and selling.

Capitalism also generates an almost infinite variety of potential relics. While the museum is a non-collecting institution, it has held drives where people bring in objects that speak to the lived experience of capitalism. (At one recent event, a student brought an empty Adderall bottle.)

“For some people, it’s a cathartic thing, but it’s also part of the conceptualizing we’re doing,” Mr. Furstnau said. “By answering the question of what belongs in a museum of capitalism, you have to get at what the boundaries of what the thing is.”

The show offers hands-on opportunities to transform labor into something else. After a turn at the minimum wage machine, by Blake Fall-Conroy, which dispenses a penny every 4 seconds (in keeping with a wage of $9 an hour), you can take your earnings to Igor Vamos’s “Anti-Capitalist Coin Crusher,” which creates souvenir pennies stamped with slogans like “Property is Theft.”

“Reckoning,” by Jennifer Dalton, calls for more abstract accounting. Visitors fill out a brief survey on areas of life where they feel they have either given or taken more than their share. They can then put the form in a plastic box marked “Surplus” or “Debt,” and take a button labeling them “taker,” “jerk,” “chump” and so on.

The exhibition presents the end of capitalism not just as a premise, but as an aspiration. “Until capitalism is over,” Ms. Steves said, “the Museum of Capitalism will still have work to do.”

But some of the pieces may also stir wistful emotions. “Wanted,” a installation by Nina Katchadourian and Julia Meltzer created in 1996, lets visitors stand inside a white cube measuring 6 by 9 by 7 feet — the size of a typical American prison cell — and listen to the 117 messages left in response to a Village Voice ad listing a fictional apartment by those dimensions. (Apparently, $612 a month for a cell-like space in “the heart of the Village” was cheap even in 1996.)

It’s a comment on displacement and inequality. “But for me, it’s also a nostalgic thing about voice mail machines almost as much as anything else,” Mr. Furstnau said. “There was a whole culture of these messages that’s gone now.”

The Museum of Capitalism

Through Dec. 10 at the Kellen Gallery at Parsons School of Design, Manhattan; newschool.edu.