Enjoy this 3 minute video where artist Justine Hill shares her ideas, inspirations and process in creating the commission The Travelers The Travelers is a large-scale work by Justine Hill, commissioned by the Cantor Art Gallery at the College of the Holy Cross where Hill received her BA. For The Travelers, Hill draws from a long-standing interest in science fiction and fantasy, citing Octavia Butler, Ursula le Guin and N.K. Jemisin as inspirational authors in this genre alongside an interest…Read More

Read on Iris and B. Gerald Cantor Art Gallery. 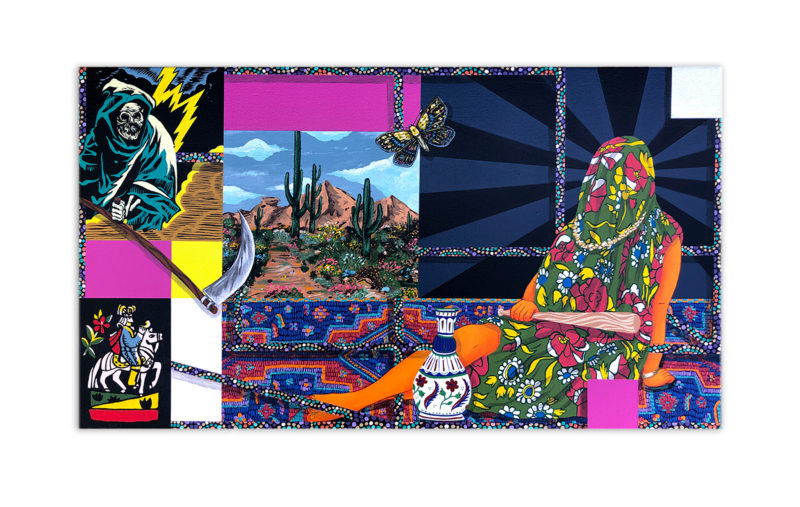 Justine Hill featured in Architectural Digest: “Inside This Upper East Side Pied-à-Terre, Every Detail Matters”

Interior designer Gregory Rockwell crafts a colorful New York City apartment by Hannah Martin / Photography by Ori Harpaz April 14, 2021 “The walls aren’t striped, they’re actually hand-applied fluted Venetian plaster,” says Rockwell, who teamed up with Kamp Studios on this statement for the entryway, which he decorated with a 1960s Italian aluminum mirror from John Salibello and a 1940s Swedish chest of drawers from England, topped with a ceramic work by Cody Hoyt from Patrick Parrish. “This [home] is about you and your friends….Read More IN CONVERSATION Join Justine Hill and art historian and catalog essay writer, Dana Rodriguez as they discuss Hill’s current exhibition “Touch.” Wednesday, October 14th, 6-7pm EDT Watch the recorded event Purchase Catalog Read Online Justine Hill is based in Brooklyn, New York. Hill received her MFA from the University of Pennsylvania and her BA from the College of the Holy Cross. Hill’s most recent solo exhibitions were Touch at Denny Dimin Gallery and Pull at MAKI Gallery in Tokyo (2020)….Read More On View Justine Hill’s New Show of Sculptural Paintings Is a Timely Homage to the Importance of Touch—See Images Here This is Hill’s third solo show at Denny Dimin gallery. Caroline Goldstein, September 23, 2020 “Justine Hill: Touch” Through October 31 at Denny Dimin Gallery What the gallery says: “Justine Hill’s work explores the boundaries of abstract painting with her unique approach to form and mark making. The works in the exhibition are a continuation of what she has styled…Read More Cultured Magazine invited Justine Hill to shoot a virtual studio visit of her new studio to preview work for her upcoming exhibition at Denny Dimin Gallery in New York this fall. 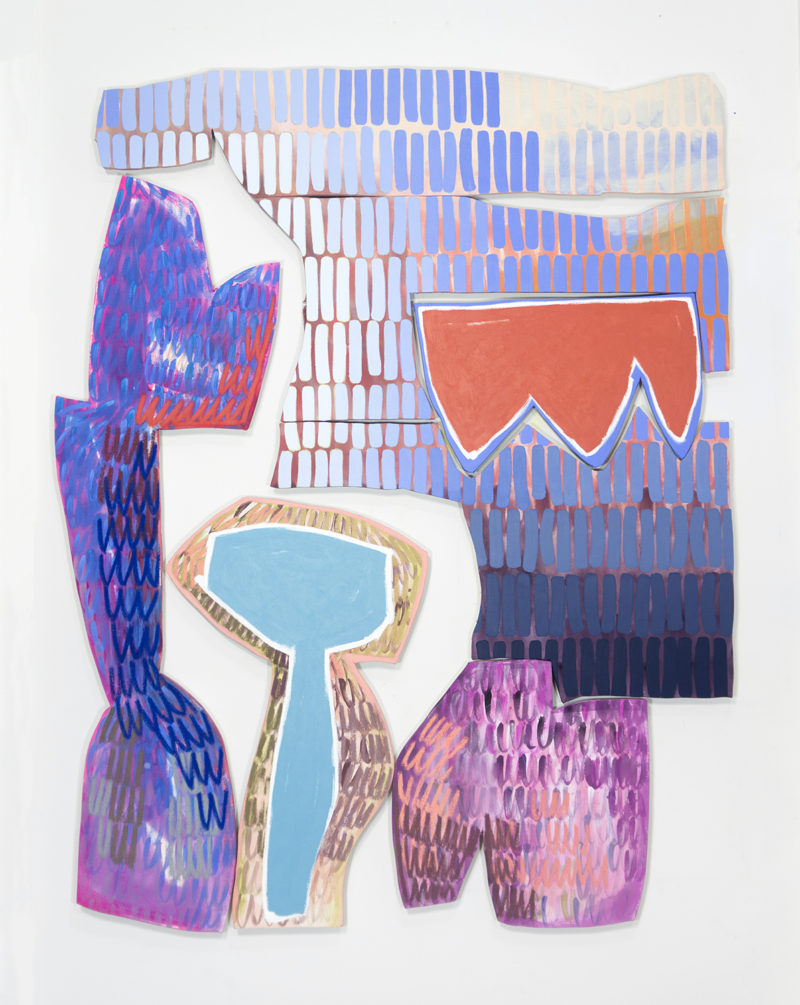 Justine Hill at Denny Gallery By: Elizabeth Buhe June/July Issue Art in America Read on Art in America For the eight paintings on view in “Freestanding,” Justine Hill tempered the sense of levity conveyed by her scribbly mark-making, cartoony motifs, and cheerful colors (periwinkle blues, apricot oranges, royal purples) with a measured consideration of form and composition. Tensions between foreground and background animate the paintings, which continue a style of work she began pursuing in 2015. Each painting is a…Read More Davis Museum at Wellesley College Acquires Work By Amanda Valdez and Justine Hill at NADA New York, 2018. Acquisition posted in The Art Newspaper on March 9, 2018. “…International Women’s Day was observed when the Davis Museum of Art at Wellesley, one of the first colleges for women in the US, acquired two works from New York’s Denny Gallery, Drunkard’s Path, an embroidered and quilted piece by Amanda Valdez, and a new four-panel painting by Justine Hill called Figure, Ground,…Read More Justine Hill Quoted on Elizabeth Murray in The Art Newspaper

Pace Gallery remembers Elizabeth Murray with show of her 1980s work The late painter’s shaped canvases, including some museum loans, are the subject of a survey in New York Pac Pobric | 2nd November 2017 Read on The Art Newspaper The late American painter Elizabeth Murray (1940-2007), whose shaped paintings are rarely what they seem, is the subject of a new exhibition at Pace Gallery in New York. The survey of her work from the 1980s includes loans from US…Read More Justine Hill mentioned as an influencee of Elizabeth Murray in Hyperallergic

How Graffiti Influenced Elizabeth Murray Given some historical context, the impact graffiti had on the paintings Murray made during the 1980s is plain to see. By: Jason Andrew Posted on: October 25, 2017 Read on Hyperallergic The 1980’s were a bodacious, hellacious, and most radical decade. Mötley Crüe got it right titling the era (and their greatest hits compilation album) the, “Decade of Decadence!” Intertwined with the rise of hip hop culture and a myriad international styles riffing off the energy…Read More Read on Two Coats of Paint. Interview: Justine Hill in Bushwick By: Sharon Butler, May 13, 2016 I first saw Justine Hill’s paintings in “Metamodern,” a 2015 group show at Denny Gallery that explored the contemporary fusion of Abstract Expressionism, Minimalism, and Primitivism. Her shaped canvases seem to jump off the wall with their unexpected amalgamation of Modern abstraction, postmodern humor, and the uninhibited brio of old-school graffiti taggers. In a recent studio visit, Hill shared work that she’s making for her forthcoming…Read More