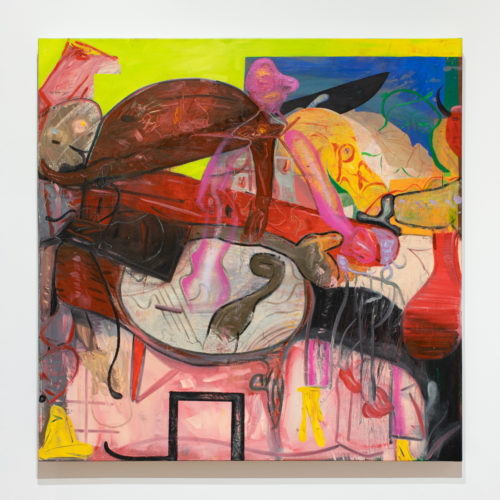 Denny Dimin Gallery is pleased to announce Biotech, a solo exhibition by Scott Anderson, on view from February 26th to March 27th, 2021.

Scott Anderson is a painter whose work addresses memory, technology, and visual culture. The artist’s process begins with an extensive drawing practice, which provides preparatory materials that the artist develops and deconstructs on the canvas. Anderson’s approach is psychologically provocative and intellectually rigorous. He uses humor in his titling and figuration to efface a deeper disquiet, resulting in ambivalent, enigmatic works. His style is uniquely formally complex, challenging the viewer to delineate between passages of abstraction and figuration.

Biotech includes new paintings (2019-2021) that the artist made in his studio in Albuquerque, New Mexico. Anderson painted these texturally rich works with combinations of oil, oil crayon, colored pencil, enamel and other less typical materials such as ink and sawdust, creating deep layering not only of materials but also of narrative elements. The title of the exhibition, Biotech, refers to the artist’s ongoing interest in the impact of technology on art making, daily life, and visual culture. Along these same lines, the artist’s titling of individual paintings refers to everything from recollected memories (e.g. Drive-Thru Salad, Country Song), matter-of-fact descriptions of purportedly identifiable figuration (e.g. Green Uvula), to ironic self-criticism (e.g. Bad Pieta).

Scott Anderson was born in 1973 in Urbana, Illinois. He received his BFA from Kansas State University and his MFA from the University of Illinois at Urbana-Champaign, and he attended Skowhegan School of Painting and Sculpture. He is represented in New York by Denny Dimin Gallery and in Paris by Galerie Richard. Biotech is his third exhibition with Denny Dimin, following Streaming by Lamp and by Fire in 2018 and On the Nose, a two-person show with Austin Eddy in 2016. Anderson has had recent solo exhibitions at the Nerman Museum of Contemporary Art in Kansas, Galerie Richard in Paris, and CES Gallery in Los Angeles. Anderson has participated in exhibitions at MCA Chicago, the Parrish Art Museum, The Warhol Museum, the Cranbrook Art Museum, Thomas Erben Gallery, and Kavi Gupta Gallery. His work has been featured and reviewed in numerous publications including Artforum, The New York Times, The Washington Post, The Los Angeles Times, The Chicago Tribune, and New American Paintings. Anderson was the recipient of a Pollock-Krasner Foundation Grant and The William and Dorothy Yeck Award. Anderson is an Associate Professor of Painting and Drawing at University of New Mexico College of Fine Arts.

Sarah Diver is an emerging writer and curator located in Portland, OR. She is currently working as the Research Associate for the Jordan Schnitzer Family Foundation. During her tenure as part the curatorial staff at Storm King Art Center between 2016 and 2020, she helped realize several major outdoor exhibitions, including artists like Mark Dion, David Smith, Jean Shin, Elaine Cameron-Weir, and Heather Hart. In 2015, she curated an exhibition on contemporary indigenous printmakers at the International Print Center New York. She received her MA in Modern Art: Critical and Curatorial Studies from Columbia University in 2016, and her BA in art history, studio art, and chemistry from the University of Colorado Boulder in 2013. She continues to write creatively and is authoring a cookbook-memoir as well as short fiction works.

One of the many topics they discuss is how the title “Biotech” and the work in the show has shifted for them both since the exhibition was originally scheduled to take place in April 2020 to all most a full year later when the exhibition was actually hung and opened to the public in February of 2021.